Izhevsk State Medical University was started in 1933. Izhevsk State Medical Academy is located in Izhevsk city, which is the capital of the Udmurt Republic in Russia. Izhevsk is a city established along the Izhevsk River in the Western Urals. It is the political, economic, cultural, and educational centre of the Volga Region. 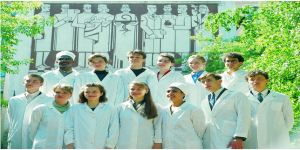 The hostel in Izhevsk State Medical Academy is very hygienic, neat, and clean. Students are offered a room on a shared basis, either twin or triple in a room. All the rooms are equipped with the facility of a room heater, Wi-Fi, a TV set, and a telephone. The hostel has special security to provide protection to the students, and special attention is paid to the girls’ security. Hostels are very near to the university.